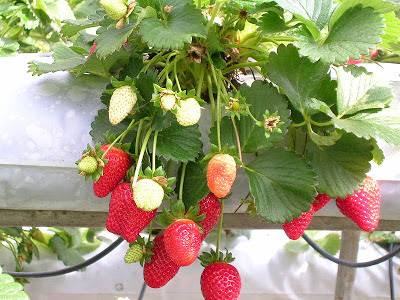 Yesterday, I went berry picking. Spent 3.5 hours in the strawberry patch.  Picked 14 lbs.  Wore rain boots because I knew the rows would be soggy, and they were. I was up to my ankles in mud.  Sucked into place, lifting up leafy plants, trying to find strawberries that were still firm and not waterlogged. I was so scared that I was going to lose my balance and fall ker-plop.  Bigger fear of twisting my ankle or throwing my knees out. So proceeded with caution.
During my session, I had company on and off.  One family, with five young children, was there picking berries as fast as they could.  Mom and Dad were serious pickers.  Their children, unbeknownst to them, were serious eaters. They ate all the berries while the parents picked.  I know that the parents were dreaming of shortcake and fresh berries. They were determined to get the most juicy ones.  As the children ate, one after another, they complained: I'm bored.
When can we get ice cream?  I'm want to goooooo.  When the parents proclaimed: I think we have enough.  They didn't expect to see the empty baskets and all those smiling rosy red mouths.

Not missing a beat, the parents looked at each and said, Let's pick cherries, and off they went.

It's Official, Summer Canning 2013 has begun:

This morning I woke up early and began another 3 hour session of putting by strawberry jam.  Two batches and many jars later. They are lined up like a marching infantry on my kitchen table.  The most gorgeous shade of ruby. The jam is so delish! I have people who wait for their annual jar(s).  They won't be disappointed.  I'm going to go back for raspberries and sour cherries.  In spite of all  the rain we have been having, the fruit looks good.  So glad the sun was out yesterday and today.  No rain  in almost 2 days, but they say more is coming.  I'm hoping our garden is dry enough to do some weeding.  Things are looking okay out there. But the cornfields surrounding our farm are looking a little delayed and stressed.  We had to restart some plants, because the first plants (esp. cukes) disappeared (literally, they became strings and flew away).

Next week is July.  Are you ready?    Oh summer, please slow down. I want to enjoy every minute.

On Tuesday, June 25th, we went to see David Byrne & St. Vincent (Annie Clark) in concert at the Rochester Jazz Festival.  Below is a You Tube clip of the song "Who" from their album Love This Giant. (I'm just sharing this).

We were in the uppermost balcony of Eastman's Kodak Hall, which I call  the postage stamp seats. No sweat. I think these may be some of the best seats in the house. This concert was big sound.  I  truly love brass instruments.   The choreography of light and dance and sound, featuring everyone on stage, made the songs electric.  There was another song, that I instantly fell in love with called "I am an Ape"  but I called it Christmas Day in my conversation with Peter on the way home. I was fascinated by the lyrics. And, I found the lyrics online, which gave me the opportunity to sit with the words.

A lot of concert goers came late to this show.   A 20-something couple settled  directly in front of us, for one talking head song; then left for a couple songs, and came back again. Taking photos on Ipad.  Getting told not to take photos. So interested in each other (they couldn't keep their hands off of each other; kisses that melted like butterscotch. They literally fused) and  I kept on trying to be "Zen" about the space, meaning I could get my privacy in this public forum ( God knows they were).  I tried to keep my eyes, up and over them, but things really heated up in the encore "Burning Down the House."

Another side note.  While watching the show, I thought of the play Shock-Headed Peter.  There was something about the band's choreography that made me think of that play I saw in NYC  in 2004.

At Last, The Steamy Summer Days 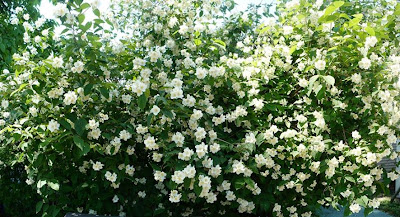 The steamy heat of June has arrived. Thankfully our gardens are drying out. Plants are surviving.
Small orchard is loaded with fruit, except one tree. Yesterday, spent the day working on my To-Do list.  Washed windows and cleaned the porch/deck. My plan is to work several hours a day on these chores until things are done. There is always plenty to do here.  This week is  busy with planning meetings and teaching.  I'm looking forward to the calendar year 2013-2014.  It will have its challenges but its joys too.  I'm so lucky to be working with such fantastic teaching artists and exceptional teachers.

Good News:  my poem "Studying the Sky" is featured on Heron Tree.  Here's the link: http://herontree.com

Since the spring semester ended, I have been writing and writing and writing. I have never experienced this  full engagement before, not like this. It's as if I'm in flight.  As an artist, I have always pursued beauty. I have lived in an idyllic place for over 25 years and I never tire of it. Inside my farmhouse, I can look out any window and write what I see, which is constantly changing.  It's a remarkable gallery.  When I'm outside, it's without the window's distance.  I'm in the action that is both universal and personal.  I'm stunned by the natural world.  I keep trying to get it right.  Since the beginning of the planting season, I've been trying to decompress.  To get rid of the toxins that assault me on a daily basis.  The spring semester is never easy.  It's a tangle of old stuff and new stuff, trying to break through.   Every year for what seems to be an eternity, I have been in this perennial garden of misgivings.  But, this year, this year something happened.


The following came as an email and I thought I  would pass it on.

Reminder - our August 2013 edition will be a themed issue for poetry – theme - BIRDS
§        Awaiting your poetry submissions on BIRDS
§        Short stories on ANY SUBJECT
§        Our Artwork section in April will include an ARTISTIC
PHOTOGRAPHY section. Please submit up to 6 photographs

What about that chapbook you’ve been thinking of publishing?
http://www.cyclamensandswords.com/publishing.php

Helen Bar-Lev
Senior Editor
PLEASE FORWARD THIS NEWSLETTER TO YOUR FELLOW POETS, WRITERS AND ARTISTS. THANKS
Helen and Johnmichael
www.cyclamensandswords.com

Write out a person's day in terms of the first things he or she does. An example is provided below:

My thoughts about this prompt:


See what happens.   Hopefully, something (ha!).

Labels: Check this out 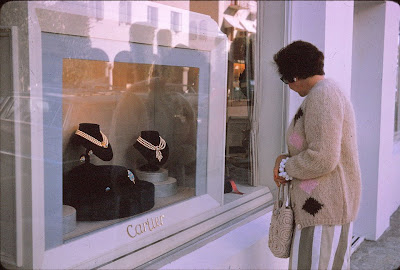