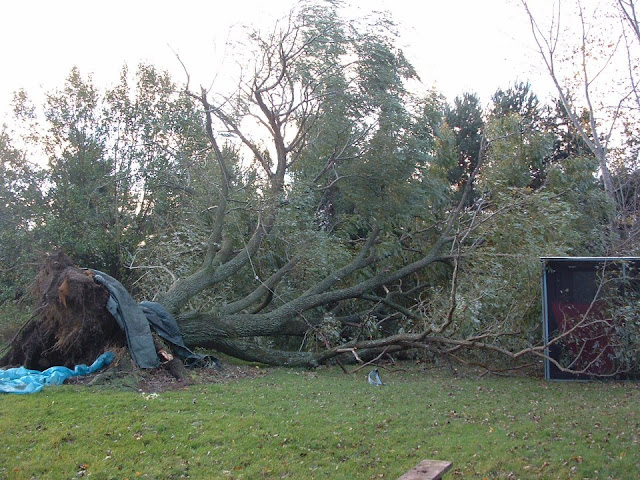 Sandy's high winds took out our beautiful willow.   Fortunately, the willow fell away from standing structures.
This is behind our barn. My sister lives on the lakeshore and she said the wind shook her house for hours.
My daughter is moving back to NYC this upcoming weekend.  We're just heartsick over what's happened there. The images on TV are chilling.  A lot of work ahead.  Putting things back together again. And all that snow in Virginia!  Thinking about everyone affected by this storm.  President Obama was firm about getting relief  and recovery started immediately.  Make it so. 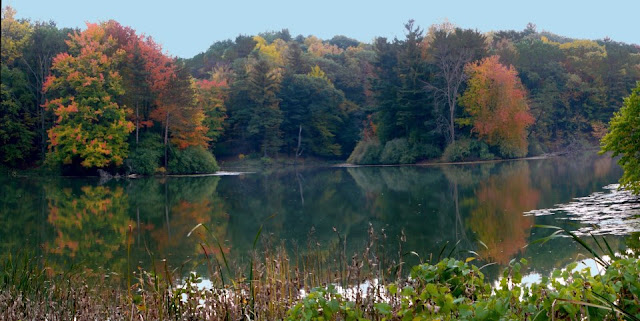 What a busy, busy, busy week. We're mid-semester.  Classes are humming along.  Harvest is starting to
wind down now.  All the shelves are stocked and freezers are full. The taste of summer will be ours in the middle of February.  This weekend will be dedicated to grading papers and writing.  Mantra: "I have promises  to keep.  Miles to go before I sleep."

At Fisher this week, James Whorton Jr. read from his recently released novel Angela Sloan. My classes read this novel and thoroughly enjoyed it.  Stylistically, the chapters are short, 1-3 pages long.  Consequently,
the reading is as addictive as eating an exceptional bag of potato chips-- you can't put it down!

The story is an adventure.  The narrator is 14-year-old Angela Sloan, who is adopted by Ray Sloan, retired CIA agent, after the murder of her family in the Stanleyville massacre in the Congo in 1964.  The novel begins in its engaging epistolary style. Some shocking things happen.  I like the way it explores identity, concept of family, love, friendship and courage.  It's a must read.

Upcoming reading at Fisher, November 1, Poet Thom Ward reading from his recent collection Etcetera's Mistress. (Accents Publishing, 2011)  This will be at 7:30 p.m. in the Golisano Gateway Mid-level.  This is free and open to the public.

Today, I had an early morning drive to Warsaw, New York.  The temperature at home was 48 degrees.  By
the time I arrived in Warsaw, the temperature had dropped 8 degrees.  Thick fog smoldering  on those painted foothills.  Small town after small town waking up to the day.   Me too.  Early rising to get there in plenty of time.   I wish I had a bit more time to mosey around in some of those towns.  Some storefronts caught my eye.   Maybe I'll have an  hour to spare in the next week or so.   We'll see.

Have some story ideas brewing in my head. These may be chapters for my half-finished novella.
I think I write in my head while driving.  So when I get a hour to write, it just comes tumbling out.  The long drives on country roads  become a meditation.  I try to relax into the road and watch the shift of the landscape.

Autumn's colors are taking hold. There's a distinct chill in the air.  One we thought would never arrive after this summer's heat.  The weatherman said we may have snow this weekend.(Snow? So soon?)  I have plans of a brief trip to the Finger Lakes this weekend.  Looking forward to hiking those hills.  A bit of painting and writing. Around here,the maples (silver, red, sugar) are just gorgeous, eye-popping color, which we haven't had in several years. Have begun my October poetry challenge.  So far, so good.  3 for 3.

There is a pond not far from our farm that I pass every day and it's full of herons and egrets, literally 20-30
poised  like dancers waiting for the music to begin. It's so beautiful to see, and I see it every day.

Today has begun while most of you are sleeping.  I have work to do before a series of meetings, then teaching, then home again.  It's mid-week.  The day we can look in two directions. Tomorrow I take my Encounters class to GeVa to see You Can't Take It With You.  Then friday will be another day of catch up.

Arrivals and Departures:  The train moves in two directions; both forecast change.  I have been startled by my reflection in the car window.  I think she is my self who knows where she is going.  I'm along for the ride.
It's always such a long ride from here to there and back again; and back again, it seems impossible that October has begun. The semester is settling in. My month old grading pen has run out of ink!  All those glossy words just slipped out of this pen!  I really like this pen and can't remember where I bought it (?).  I guess the best practice is to buy two pens and always have a back-up plan.

Maelstrom, what a great word!  It comes with symphonic background music; something by Elmer Bernstein.
I've been acutely aware of  how storms unravel in their own irony. I've been thinking about Red Jacket and Corn Planter, two remarkable Seneca leaders, who advised to sit in the center of the Long House, with all the doors open.  This way you can see the approach of the enemy from any direction and find the surest way to safety. I think this is a sound strategy.

In the past week, foxes have crossed my path 5 times.  They walk, one footstep inside the other. They run,
all feet off the ground, fleeting, a streak of red, disappearing into thickets overgrown with goldenrod and asters.  I've been thinking of Margaret Wise Brown's  Fox Eyes, a book written a year before her untimely death. The lesson to be aware of who or what is watching without fear.  Without fear, you can change the world.  You can dismiss the chronic pains-- the ones who are slowly being swallowed up by their own devices.  You see, I'm watching too. I know what's going on.