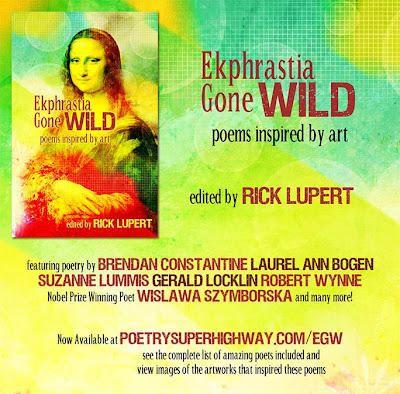 I am included in the "and many more."

See the full listing of poems/poets and links to the original art.

Lupert has done an exceptional job with this anthology and he's getting the word out.

Here's the link to the upcoming  radio show:
http://www.blogtalkradio.com
/psh/2013/09/15/ekphrastia-gone-wild-virtual-publication-party 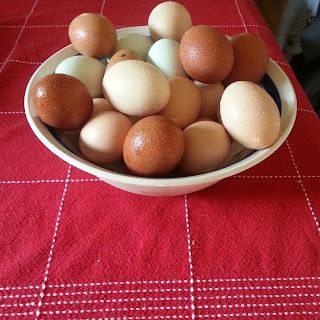 
Today is Sunday, August 11th.  It's perfect weather.
I imagine this will be a great day of wonder and wander.  I'm going to dedicate some hours to my creative work, then I'm going to be creative in getting what needs to be done, done.

This past week, while I was engaged in a summer writing camp at Writers & Books (My Name In Print), my unattended email was blowing up with all sorts of good news. Sandy Benitez editor of Poppy Road Review nominated my poem "The Clearing" for Best of Net. http://poppyroadreview.blogspot.com/.  Please check out all the poems she nominated.  I am so honored to be selected.

My poem  "Rainier" is included in this summer issue.  The current call for Fall issue  has a day left to submit. Editor Larissa Nash  writes: "In anticipation of Halloween, I would like to see a variety of themed submissions for the Autumn 2013 issue: work that concerns the dark origin of fairy tales. Your ghosts. Your goblins. Your beasts. Rattle those chains! The reading period for the Autumn 2013 issue will close August 12th, 2013."  This is a terrific journal.  I hope you will check it out and submit your best work.

The Flutter Poetry Journal, edited by Sandy Benitez accepted three of my poems for its recently released issue. Check it out.  http://rarepetal.webs.com/   Sandy is also the editor/publisher of Flutter Press.
Check out the new poetry titles.  I have been following several of the poets listed in journals (online and print). I will be ordering shortly, especially want  Landscaping by Changming Yuan.

Received this call for submission from Ragged Sky:

Ragged Sky will be publishing Blanket Stories, a poetry and art anthology, in 2014. We hope you will participate.


The Blanket Stories Project invites poets and artists to respond creatively to a story of sibling rivalry. The brief, simple story is podcast on the Blanket Stories website: http://blanketstories.net. Conceived by artist Richard Jochum, Blanket Stories aims to spread peace, cooperation, and appreciation for art & poetry.

Thanks for your support, and we hope you find the Blanket Stories Project inspiring. 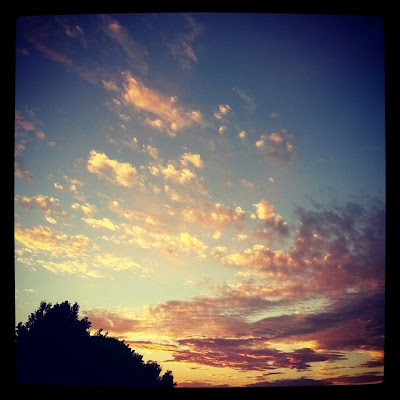 The skies in western NY are spectacular. Reminds me of Maxfield Parrish.

Meghan returned home this week and we have enjoyed having her home.  Her friends came to visit too.

Our house has been full of good conversation.

In 27 days, the fall semester will  begin.  Is it possible? My precious summer days have been swept away . . .

I have been working steady in the garden.  Last year at this time, we were harvesting tomatoes and starting to can.  This year, not so.  Everything is delayed.  I hope we have an extended summer.

This past Sunday at Liftbridge Books, I had the great pleasure reading with Karla Linn Merrifield and Colleen Powderly at the launch of:

Karla Linn Merrifield & Friends, a new anthology from mgv2>publishing, edited by Walter Ruhlmann and also including poems by Michael G. Smith, Eve Anthony Hanninen and Chris Crittenden.  Book signing to follow (the book is 53 pages; $15).   If you can’t make the reading but would like to order a copy, go to http://www.lulu.com/shop/karla-linn-merrifield/karla-linn-merrifield-friends/paperback/product-21079562.html?showPreview=true.

This collection's images are so evocative.  The musicality of each poet, unique and thought-provoking. Yes, much of it draws on Nature that considers consequences of human nature.  I'm so grateful to Karla for inviting me to participate in this endeavor.  It was a very gentle process. Ken Pobo wrote a beautiful introduction.  Thank you, Walter Ruhlmann for giving us this book.


** Come at 7PM to share light refreshments and socialize before the program ***
August is the month to hear Bart White and Priya Keefe, now Rochester residents by way of North Carolina and Seattle, among other locations.  We are fortunate to have them here!  You will be so intrigued by their work you won’t even care that it’s 98F outside!
Bart White grew up in Asheville, North Carolina in a family full of storytellers. On long treks through the Smokies, he learned to love the mountains in all seasons. A watercolorist in those days, he attended Washington University in St. Louis on a fine arts scholarship. He studied art and literature in Spain and France, drove a taxi, and was a public high school teacher in New York City before moving to Rochester, NY with his wife, two children and a fox hound. Bart teaches French and Spanish at the Harley School, champions poetry there and at the school’s summertime Horizons program where he teaches workshops. Active in Just Poets, he helped edit this year’s Le Mot Juste and organize the recent “Earth’s Water” reading at the Bug Jar with John Roche.  Bart is co-editor with Dwain Wilder of Vigil for the Shale, An Anthology of Poems in Response to Fracking, forth-coming from Foothills Press.  Two collections of his poems, Elegies and Love’s Labors, are in the works.
Priya Keefe‘s poetry has appeared on a Dublin lampost and in Seattle buses.  It is floating around the internet at Hoot,  CounterPunch, The Nervous Breakdown, and other sites.  Her writing has also been known to slay trees.  A recovering shy person, Priya has discovered she loves performing.  Her readings include Seattle City Council meetings, the Bumbershoot Festival, and Band of Poets.  Priya has been poetry editor and lead cross-genre editor for The Pitkin Review, and a curator for the poetry reading series of the Seattle City council.  Her book, Pangea’s Daughter, was an Emergency Press contest finalist, but is still looking for a home.

Hope I will see you at one or more of these events!