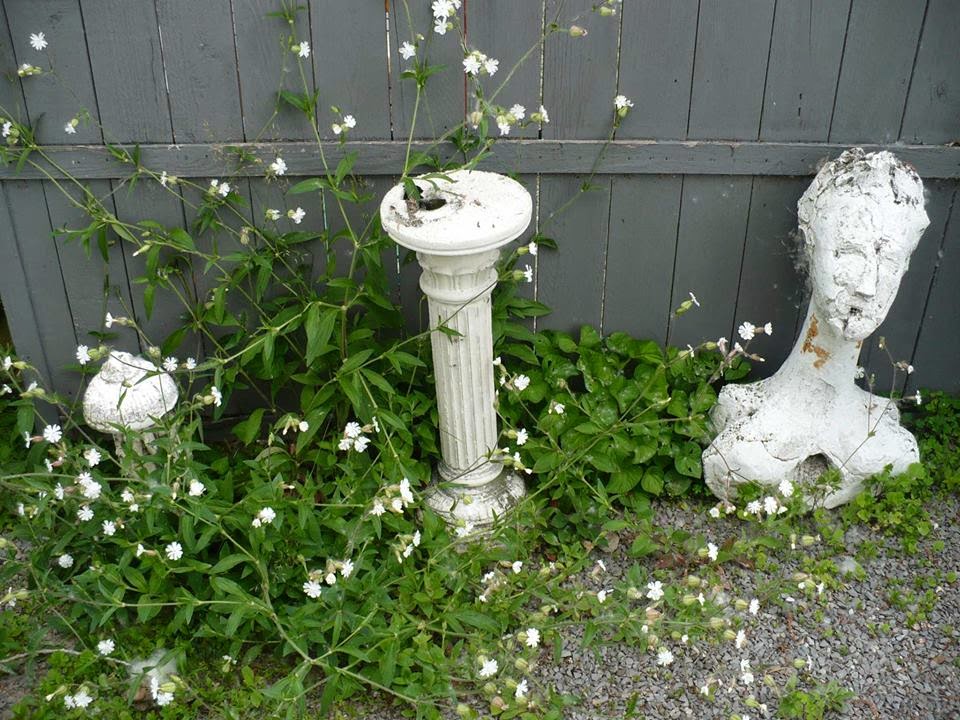 This is my sister's front yard (lake side).

I think this is an amazing accidental arrangement.

The garden is at last planted.  Spent three hours yesterday cultivating rows.  Hopefully, this will be the year I stay ahead of the weeds, which ironically are mostly edible too.The sun was so hot yesterday.  Air so muggy.  Then  rainstorms came through.  Here around 9 p.m.  But, Northeast of here the rains began around 5 p.m. I was in Rochester leading a poetry workshop and during our session the skies opened up at least three times.  Had to pull over on my way home.  It was intense.  I rolled in around 10 p.m.  Puddles everywhere, but not like the puddles in Rochester.  Will survey the garden this morning.  Hopefully, we didn't get the same volume of rain that fell a week ago.  Last week, actually a  week ago, we received 2 inches.

Yesterday, I was stunned by the jump in size of our tomato plants. Put our cages in place before the plants get much bigger and begin to topple.  This may be an exceptional season.  We'll see.


I have been spending my mornings writing, keeping up with my personal challenge: 12 lyrical CNF essays by July.  I've completed 9.  I may be in the homestretch.  One flash fiction slipped into the queue, but I can't count it in the challenge, even though I spent a very long time on it.  I have this idea that I have wanted to write for at least 2 years now.  I know this essay will have longer sections. I think I'm looking for the proper rhythm.  Maybe the rhythm is in my subject and not me.   I've wanted to start it and then get distracted by something else.

The challenge to write a Lyrical CNF in 250 words makes me so fussy. River Teeth, a journal dedicated to CNF has a column called 'Beautiful Things.'  I have really enjoyed reading what is offered there.  Marcia Aldrich writes about her father's shoes; Sonja Livingston talks about collecting driftwood.  Much to be admired, and a terrific resource for teaching.  Grateful I stumbled upon it a week or so ago.

Here we are, mid-week, nearly the end of June.  Hope you are well dear reader.

Summer Solstice. Something in the air! 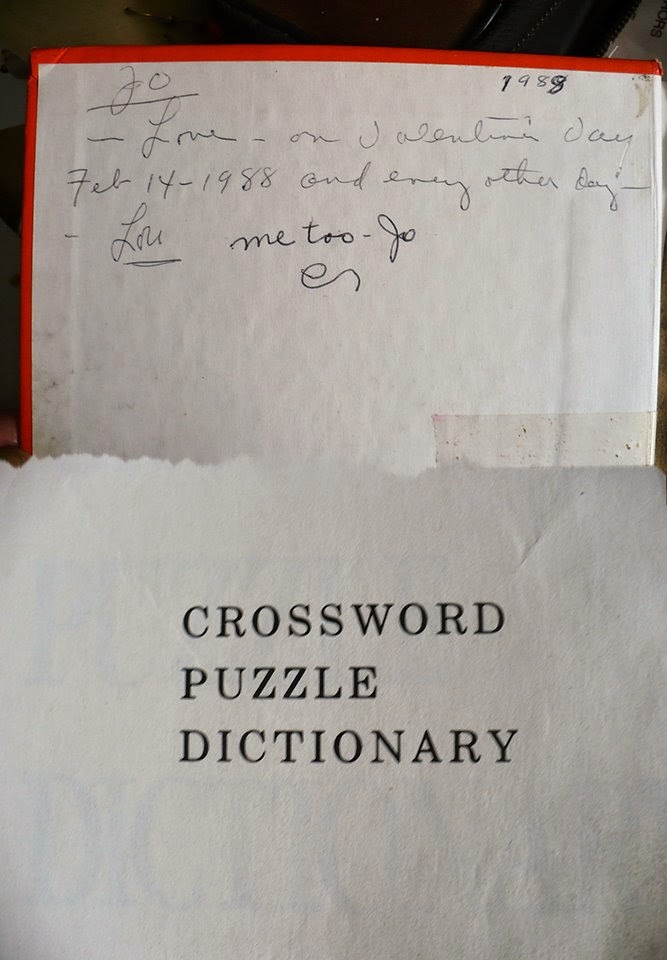 Photo by K. Iuppa
Object:  my mom's crossword puzzle dictionary, a gift from my dad on Valentine's Day 1988.  The symbol under my mom's  signature is short-hand for 'I love you.'

They were head-over-heels in love.

Karen found the dictionary in her attic space.


So here we are: Sunday, June 22,2014.  It's the third day of summer.   The morning is young and I'm trying to make a plan for today.  So much to do.  The North garden is drying out after that deluge of a storm on Tuesday evening (6/17), so I think I will be able to plant the rest of it today.  I'm grateful  that the plants I did get into the ground are thriving.  We're actually having good weather.  A bit cooler than usual.  My Magnolia tree still has a few blossoms, which is so surprising.  Checked our apple trees and it looks promising for this year's harvest.  Some of the trees are loaded. Thank you, busy bees!  They must be exhausted!

My writing challenge is going well ( I may have 12 by July 2014).  I have eight completed Lyric CNF essays.  Out of the eight, four have been accepted for publication, which makes my heart soar.  The real challenge is writing those short flash essays.  250 words is a tight word limit.  I've managed one so far.  Interesting too, a lot of journals are seeking these nugget essays.

Thank you, Diane Smith, for including me in this issue!


It's strawberry season here.  I need to go  the strawberry fields and pick enough to make the annual batch of strawberry jam. I usually go to Brown's Berry Patch. I love watching the children who eat their weigh in the fields.  Evidence: red ring around their mouths and sticky fingers.  The squeals of finding  one bigger than the next.  When it's blueberry season, the berries  at Brown's are usually bigger than nickels and oh-so-sweet.


Next week, I hope to purchase a fishing license.  I would love to sit on a  grassy bank on Sandy Creek and see if I catch anything.  Peter and I  have a plan to pack a picnic lunch and spend a lazy afternoon together.


By the end of the Spring semester, I made a contract with myself.  To write 12 lyrical creative nonfiction essays by July, of varying lengths and random topics.  I’m up to seven (7), with two accepted for publication.


I feel like I’ve tapped the right vein. I’m enjoying the freedom to push a lyrical line to breaking point.  No wonder Whitman favored this conversational line with its iambic pacing.  It has its allure for both writer and reader.  After all, it is my ambition to capture my reader’s attention, however briefly, but hopefully long enough to read my work to its end.


Then, life interrupted the rhythm that was setting up here.  Our routine turned upside down. Peter landed in the hospital for 5 days with a skin infection that developed out of blue on his right leg.  IV antibiotics, bag after bag, until his release.  Now it’s a week past.  We’ve lost count of days in the hospital, and coming home has been equally difficult because we’re slowly talking about the seriousness of it all.  I confess I’m not prepared for such consequences, but they are always there, like gauzy shadows, trailing after us.  If we were to consider consequences every day, I doubt we would get out of bed.  I guess we really should celebrate our amazing bodies.  How they muster courage to fight the unseen battle. We actually face death every day.  I get that now. I'm grateful to have Peter back as his cynical self.   Hence, I know he’s better.


When we came home, I wrote an essay called “Vigil” to purge the hospital from my thoughts, trying to make sense of all of it.


So since last Thursday, June 5th, I believe, we have been trying to fill in the gap, much like the wound that is healing on his leg.  I have been attending his wound care. The surgeon gave me a thumb’s up for my care earlier this week.  A relief to hear this approval.


Now that we’re on the mend, we’ve returned to the demands of the farm.  Two days ago, I planted two rows of potatoes, and three rows of bean plants (Blue Lakes (green), brown and white(dry beans).  The garlic rows look fantastic.  I think it’s been 5years since we’ve had a crop like this.  The weather has been so rough on our efforts.


Our tractors have been acting up, in all sorts of colicky ways.  Tractors are worse than insolent children.  You can’t bribe them at all.  Peter sorted out their mysterious ails, much to his relief.


We now can cut the grass that has been growing, growing , growing.


Yesterday, we had several hard rainstorms rumble through, starting around 4:30 p.m. and coming on in surges every two hours.  It was muggy yesterday.  After the rain, the air lightened up as evening came on. The tree frogs were singing harmonies, call and response.


So here I am this morning, thinking about writing  . . .

June 1st. Our Life In Transition

Often, actually every year, I wonder if I disturb our farmhouse's established  routine.  I'm home in the Summertime. It's quite a luxury, being here, without the rush.  I wander, work, talk to Peter, talk to the cats, drink coffee, look at the blue-blue sky.  It's so green outside.  We have had perfect weather.  The lilacs are in bloom, and smell so heavenly.The plants are jumping out their seed trays.  I check on them every morning, afternoon, night.  I love every one of them.   I dream of what they'll become.

I continue to write every day without any false starts.  Yesterday, I finished my sixth lyric essay called "Pin-points."  There is an essay I want to write, have wanted to write for over a year, but haven't figured it out. Not yet, at least.  It's actually a mundane topic that has its ritual. The ritual is what makes me dreamy.
I get lost in thought whenever I'm  doing this particular chore.  It's a metaphor for our life here on Red Rooster Farm.

Two of  my recently written lyric essays, "Surrender" and "Worn Shoes" have been accepted for publication.
This feels like a warm embrace, a kiss on both cheeks; I am so grateful to these editors, for giving my work a
gallery.