Up In the Air! 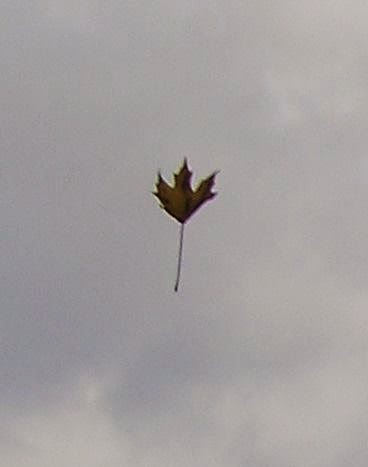 Photo by Michael Czarnecki, Fall 2014
used with his permission.

Autumn.  Say it aloud. Hear its sound of yum; taste it with your tongue. This season of weight and delight offers us a full share of its hours. Don't miss out on
that walk in the park, kicking the leaves, or sharing a cup of something with your family and friends.

I have been tying to slow things down a bit; making a conscious effort to enjoy the people I'm with when I'm with them, especially my students (all 102 of them) this semester, who are truly some kind of wonderful.

It's getting dark early now.  Soon, the clocks will click backwards, and we will return to the rhythm I love best to everything.

You don't know how I love taking back that hour.

I confess this week, actually starting  last Sunday night, I was praying for a snow day.  I need a day to just hunker down without any interruption. (Who am I kidding?) I think this is the reason why I get up in the middle of the night to do work.  This weekend I will be another grading marathon.  I think I have close to 600 pages of quilt essays, which I have started to read, but haven't had big chunks of time to get it all done.  This weekend is do or die.

I am glad to report that the harvest is nearly complete.  Still have to pick more apples and carrots ( as most of you know, I planted over 400 carrots-- all named Jack). As soon as this is done, we will be tuning over the garden.  On Halloween, we celebrate our 26th year living on the farm.

Come join us for a very special meeting of Just Poets on Saturday, November 1st at 1:30, when we welcome James Longenbach of the University of Rochester. James will be speaking on the craft of poetry writing, and then will answer questions submitted by you.

Just Poets meets for programs and workshops from 1:30 to 4 p.m. at St. John Fisher College in the Campus Center (COP) conference room on the second floor on the first Saturday of every month. We’ll have refreshments and several of Jim’s books available for purchase at the November 1 meeting.

Interested in attending?
Please RSVP Celeste Schantz at miramani@rochester.rr.com or respond Yes or No on the FB events page (forthcoming on the JP Facebook page).

Do you have questions about craft that you’d like to submit?
E-mail them to miramani@rochester.rr.com by October 25th.

James Longenbach is a poet and a critic whose most recent collection of poems, The Iron Key, is a meditation on the conditions and consequences of beauty. His critical work, The Art of the Poetic Line, is an account of the work of lineation in free-verse, syllabic, and metered poetry (ranging from Shakespeare to Ashbery). He has also written widely about modern and postmodern poetry, sometimes emphasizing the historicity of poetic language (Wallace Stevens: The Plain Sense of Things) but also exploring the ways in which poems resist their historical situation (The Resistance to Poetry).   See you there!
Posted by M.J.Iuppa at 3:29 AM No comments:

Poet Claudia Stanek, reading from her recently released chapbook, Language You Refuse to Learn, which was a co-winner of Bright Hill Press’s 2014 annual contest.  Book signing to follow the reading.

Cost: Free and Open to the Public

Rochester, NY~Claudia M. Stanek grew up in the blur of murmurs and silences of Polish-accented English while literally living on the border of Polish-Catholic steel town Depew and German-Lutheran rural Lancaster in Western New York State. Her award-winning chapbook, Language You Refuse to Learn, has just been released from Bright Hill Press (September 2014). Other poems have appeared in Conte Online, Redactions: Poetry, Poetics & Prose, Euphony, Ruminate, and Fourth River, among others, as well as the anthologies Cinquainicity (Palettes & Quills, 2009), Community Voices (University of Rochester, 2009), Knocking on the Silence: A Finger Lakes Anthology (Foothills, 2005), Le Mot Juste (Foothills, 2005-2010), and Common Intuitions (Palettes & Quills, 2003). Her poem “Housewife” was the inspiration for composer Judith Lang Zaimont’s commissioned libretto for the 2009 Eastman School of Music’s Women in Music Festival. Claudia received a Significant Opportunity Stipend from the Arts & Cultural Council of Greater Rochester and was awarded a writer's residency in Poland. Her work has been translated into as well as published in Polish. She holds an MFA from Bennington College and lives in East Rochester, NY where she and her rescued pets enjoy viewing the birches from her reading nook. Her web site is www.poeticeffect.com.
Posted by M.J.Iuppa at 3:18 AM No comments: