Last Day of Summer . . . The Beginning of a New Year

Last Saturday I celebrated a birthday. Not an ordinary birthday, but one that has made me quite introspective.  This will be a year of journey.   In Bon Voyage, my sister Andrea sent me a gorgeous bouquet of Autumn orchids. Exquisite. And, my son Nick sent me flowers too-- a heavenly arrangement of white roses, lilies, golden rod . . Really lovely, while, yellow and purple/pink and still beautiful.

I love flowers.  I plan on drawing (watercolors) of these arrangements this weekend to keep them always.

This past week, CAST came to St. John Fisher and gave a remarkable performance of Shakespeare's Antony and Cleopatra. Strong acting all around, which was heightened by the vision of their director Nikki Moss. Bold elements of choreography and soundtracks, use of lighting,and an elegant set design captured
the  play's drama.  The audience was spellbound.   Such talent.  Such a pleasure having them on campus.


Yesterday, as the CAST company was getting ready to leave campus, Martha, a lovely young woman with brown curls and  kind eyes, in an unfettered way, revealed that she has lost her Mother's ring.  I heard  mother's ring  in capital letters: LOST MY MOTHER'S RING. What?--When did you realize it was gone?  And she proceeded to unravel her whereabouts  from the striking of the show to their return to the Inn where they were staying.  In this, several others overheard the conversation and, in an equally unfettered way, gave reports on where they last  saw her  mother's ring, which was in the dressing room. So I checked the room, but it was locked. I called security to come over, which he did pronto. During this brief wait, it's revealed that she had lost it earlier, on a beach, and one her cohorts had found it.  Hey, look, did anyone lose a ring?  So this is the second time she has lost her mother's ring.  They're still unfettered by this, which made me remain calm. The security officer arrived and the three of us walked to the dressing room.  The room was tidy.  We scanned all the tabletops. We had a bit more conversation about the ring, still looking around in the room's natural light.  We didn't turn on a light.  The floor's a milk chocolate linoleum.  I could feel Martha's heart sinking. In the pause of giving up, I thought, ring manifest.  Then I looked down and sure enough there's the ring on the floor.  I picked it up. A gold ring with a heart in its band.  Her mother's ring. Found.  I handed it to her. She was so elated, so was the security officer, who I think felt her heart sink too.  All of us relieved. Still in my head: HER MOTHER'S RING. Me,acting on her mother's behalf, asked the million dollar question: Does that ring fit your finger, Martha?  And we had a bit more conversation.  Martha happily regarding her ring. Watching her, I thought, it's important not to lose heart, not to lose your mother's ring.  O, Martha, my dear . . . Rest of the day, I hummed the Beatles' tune. Thought about their safe passage-- three over-stuffed vans making their way down the highway to Boston.  I hope they look at the landscape, notice some leaves changing colors on their way.  Maybe, some of them did, but most, I think, ate their boxed lunch and settled in for a nap. Over the course of the time I spent with them, I asked them to be sure to do certain things. Some of which they did do and some of which they didn't do.
Have faith, Omi said, with his reassuring smile. Such good advice. 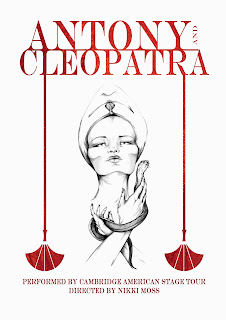 St. John Fisher College's Visual and Performing Arts Minor Program will host the Cambridge American Stage Tour (CAST) to perform Shakespeare's Antony and Cleopatra for one performance only on Thursday, September 20, at 7:00 p.m. The performance will take place in Cleary Family Auditorium.
Marking the launch of CAST’s 13th stage tour, this year’s production explodes onto the stage with a stark, visceral, and physically powerful rendering of one of Shakespeare’s most vibrant tragedies. Antony and Cleopatra sets a rising star against a hero in decline, while pushing to breaking point the passion that could topple empires.
The company of 18 full-time touring members includes a number of performers with professional film credits. Genevieve Gaunt (Cleopatra), an alumna of the Harry Potter franchise, is among them. General admission tickets cost $5.00. St. John Fisher College faculty, staff, and students will receive free admission with their College ID. For more information, contact M.J. Iuppa at (585) 385-8412.
Posted by M.J.Iuppa at 4:23 AM No comments: 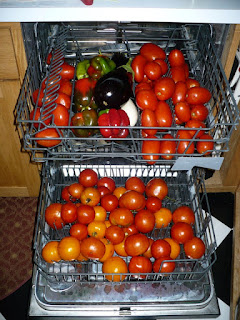 Photo: K.Iuppa  Mother Lode!  We don't mess around on our farm!

Took a boxful of veggies (tomatoes, eggplant, and peppers) over to my sister Karen's house.  She washed them and put them in her dishwasher to dry.
What's not included in this picture: two jars of sauce, a bouquet of basil,  a container of red-yellow tomato with eggplant sauce, a container of roasted red peppers.

It has been a bountiful harvest.  Picking every day. Cooking in the wee hours of the morning.

Autumn approaches; maples wear their red hearts on their leaves.
Whose door will the wind knock on tonight? If yours, and you open it, will the cool fingers of winter touch your cheek, or the warm breath of summer whisper in your ear? Sit zazen beneath an intoxicated maple while autumn writes her story on your palms.
OR – Come to Writers and Books for an evening of masterful literary delight, featuring Teresa Peipins and John Roche!


Teresa Peipins is a writer of Latvian descent from Western New York. She lived abroad for over twenty years. Her chapbooks, A Remedy of Touch and Box of Surprises were published by Finishing Line Press and are available on Amazon. Her poetry, fiction, and articles have appeared in Barcelona Ink, The Barcelona Review, The Buffalo News, Conte, Hawai’i Pacific Review, Poesia, and other literary magazines in the US and abroad. Her short story, “That Underwater Place” was nominated for a Pushcart Prize. She has taught English language at the University of Barcelona, the Open University of Catalonia, and presently at the International Institute of Buffalo.

John Roche is an Associate Professor of English at Rochester Institute of Technology, and also the current President of the Just Poets organization. Dr. Roche was the chief organizer of the 2010 Black Mountain North Symposium in Rochester, NY. He earned his PhD from SUNY Buffalo, studying with Robert Creeley and John C. Clarke. His full-length poetry collections, Topicalities (2008) and On Conesus (2005) are available from Foothills Publishing (Kanona, NY). His poems have appeared in magazines like Yellow Medicine Review, Flurb, House Organ, Rootdrinker, Big Bridge, Jack Magazine, Interim, Intent, Woodstock Journal, Burning World, Napalm Health Spa, and in several anthologies. He edited the collection Uncensored Songs for Sam Abrams (Spuyten Duyvil, 2008), co-edited Doing Time to Cleanse My Mind (FootHills, 2009) with Patricia Roth Schwartz, and edited Martha Rittenhouse Treichler’s Black Mountain to Crooked Lake: Poems 1948-2010, with a Memoir of Black Mountain College (FootHills 2010). His 2011 book of poems, Road Ghosts, published by theenk Books (Palmyra, NY), is available from Small Press Distribution <www.spdbooks.org>. His newest, a chapbook titled The Joe Poems: The Continuing Saga of Joe the Poet appeared this summer from FootHills Publishing.
Posted by M.J.Iuppa at 2:59 AM No comments:

I went to college in a time of pet names.  My cohorts were known by names given in those first days-- Face, Skunk, Froggy, Motorhead, Angel, Arizona, Whale, Snowman, to mention a few. Not sure if this still happens. I've been trying to remember their real names. My memory is 50-50.  But I can still see their faces, their body language. That's funny, right.  I still have their stories.

I'm been thinking of the sunday afternoons we spent riding "up" which was really down, Humphrey Hill.
It's an optical illusion or ellipitical hill. I would love to go back there, even bring along the cuba cheese sandwiches and rolling rock beers.  I want to climb the mountain where the pasture called "The Heart" gave us a living room to talk quietly, or play frisbee with Billy's  wonder dog Seamus, or lie on our backs and stare
at the wide blue sky. We had so many hours of talk.  So many mouths moving. We were political and opinionated and outrageous. We were small but wiry.

I would give my eye teeth, perhaps half a ring finger to have an hour of those days.  Hmmm, let's see, I would choose the day we sat on the lawn in the quad  and listened to Tom Rizzo play his guitar. I loved listening to our dreams. We were going to change the world.  We did change the world.

Now another semester begins. Walking on campus, I overheard patches of conversation.   Social Media is actually anti-social.  A lot of people listening to music, or emailing or checking their text messages, or sending a message: " Where are you?  How was your first class?  I can't believe I have to buy books."


It's September. My big toe is still dragging in summer.  This summer was a wild ride.  The good and not so good news that affected our living day to day.  My thoughts, trying to make sense of what's happened. Friends who have passed; unexpected health issues; the blessing of good friendships-- being aware of  family and friends, hoping for the best; being there.