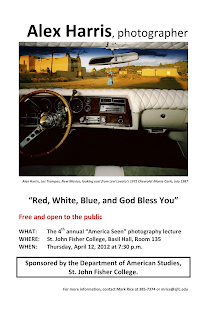 Free and Open to the Public.
Brief Bio Note:

Alex Harris is a professor of the practice of public policy and documentary studies at Duke where he is also a founder of The Center for Documentary Studies and DoubleTake Magazine. Alex has photographed extensively in the American South, New Mexico, Alaska, and Cuba. His work is represented in major collections including The J. Paul Getty Museum in Los Angeles and The Museum of Modern Art in New York. His awards include a Guggenheim Fellowship in Photography and a Lyndhurst Prize. As a photographer and editor, Alex has published fourteen books including most recently, The Idea of Cuba. His next book, a collaboration with the evolutionary biologist E.O. Wilson, is called Why We Are Here Mobile and the Spirit of a Southern City, and will be published by Norton in the fall of this year.
Posted by M.J.Iuppa at 6:32 PM