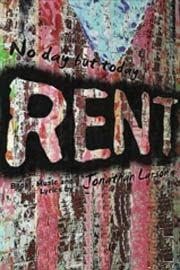 Went to see Rent last night at JCC. Amazing production-- everything from sets to lighting to staging. The cast has big talent and strong voices, standing up to the demanding vocals of the show. If you're in the Rochester area, check out this production. Don't wait to get tickets. They're selling out each night, and have already added an extra day of performances.
Posted by M.J.Iuppa at 8:34 AM