1. Please check out the latest issue of Hobble Creek Review:http://www.hobblecreekreview.net/
Once again, editor  Justin Evans has assembled a hefty (worth their weight in words) collection of poems and essays, showcasing 15 poets and 1 essayist. I'm grateful to be included in this.  Over the past year or so, I have been following the work of Kathleen Kirk,  Carol Berg, Corey Mesler and I'm so happy to see them included in this issue.  Thank you, Justin, for publishing two of "Conversation with Neruda" poems.  This series began last summer at this time.

2. My poetry challenge 31X31 is in progress.  Thus far, I have 13x31.  I'm two ahead in the daily count.  Will post my titles at midpoint and at end.  One poem  has tortured me.  I can't believe the amount of revision it has gone through.

Here are their Bio Notes:

Carol McMahon was born in Syracuse, and, while in second grade there, wrote one of her first poems, My Dog Chip. She enjoyed creative writing classes in high school, but studied Theatre Arts and Education in college. She has introduced young people to poetry through teaching at Writers and Books and as a middle school English and Social Studies teacher in the Williamson Central School District. Her work has been published in HazMat Literary Review, Lake Affect Magazine, and Blue Collar Review. A chapbook, On Any Given Day, was published by FootHills Publishing. Carol has three children.

David Jolkovski was born in the Bronx during the Depression; he received his BA from Columbia College in 1954. He and Marie, his wife of 59 years, have three grown children and two grandsons. In the 1950s David served his compulsory two years in the Army, six months of which were spent in Salzburg, Austria, where Marie joined him. During the 1960s the whole family moved to the Netherlands for three years; David managed sales training and promotion for an international firm. They returned to the US in 1972. David established a small firm to sell self-adhesive materials. He retired in 2002. His poems have appeared in Upcountry; Desperate Act; Fan, a Baseball Literary Magazine; Gleam; HazMat Literary Review; and ByLine.


Driving home, I thought about the reading a lot.  (note: I have a 45 minute drive to nearly anywhere, so I've got plenty of time to think.)  I realized that poets spend so much time arranging their words that it becomes
their lives, and last night I heard two very different voices, but both delivered a sequence of poems that were
views of their  past- present- future.  David in his 'bits of frosting' between each poem said the most illuminating thought on writing, that is this (paraphrased, of course):  Everything in the poem has happened, fiction or not, it occurred in one's mind, and here it is.  So true, especially now that I'm immersed in so much writing. Carol read several poems that broke my heart.  One about holding her mother's hand, which took me back to the first time I heard the poem. A time close to my Mom's passing and I was trying to make sense of the loss. (Still am). They had a terrific crowd. 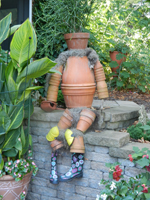 5. You're Invited to a Literary Garden Party
Saturday, July 14th 6:30 p.m.
$75 per person.
Writers & Books invites you to a Literary Garden Tour fundraiser with dinner, drinks, poetry readings and more. Join us for a dinner garden party at the home of Jed and Peggy Fox.
Enormous container plantings at the top of the driveway and a whimsical "flower-pot lady" are just the first of the wonderful treats you'll find highlighting the extensive garden that Jed and Peggy have created over the past 30 years. A passion for gardening and the quest to try new things, along with exposure to international gardens have been the driving force behind what you will see here. All of the design, plantings, maintenance, pond construction, etc. have been done by Jed without any outside assistance.

When Jed started his gardens 30 years ago there was very little to work with. Today you'll enjoy his wonderful array of mature and seldom-seen trees including Tri-Colored, Fern Leaf and Dwarf Weeping Purple Beeches; Eskimo Snow Maple; Paperbark Maple; Japanese Maples; Japanese Umbrella Pine; Cedar Of Lebanon; various magnolias and dogwoods, Dwarf Gingko; Styrax; Stewartia; a mix of fruit trees; strategically placed dwarf shrubs and much more. You'll also be able to tour the huge assortment of Hostas and Day Lilies. (All maintained with herds of deer as neighbors).

International travel has been a large influence on the ponds and gardens. The lotus pond was influenced from travel to China as was the Zen rock garden while the reflective pond's influence came from a trip to Greenland. The 2-pool pond, with a connecting stream, bog and waterfalls is well stocked with generous sized koi and multiple water plants.

The entire garden is divided into "garden rooms" that can be enjoyed from all sides of the house and is designed for four seasons of interest. Stroll the gardens, ask questions, take pictures, and pick up a plant source list, map and tips sheet. Enjoy the mix of tradition and contemporary design, the incorporation of metal artwork and lawn "art", the giant chimes, and don't forget to check out the tongue-in-cheek humor integrated throughout yard.
And you won't want to miss the poetry readings by M.J. Iuppa and Charles Cote, which will take place at different locations and times throughout the evening.The gardens have previously been featured on garden tours for the Genesee Land Trust, Rochester Civic Garden Center, Memorial Art Gallery and other groups. Don't miss this opportunity to take part in this unique Literary Garden Party.

All proceeds from this event will benefit Writers & Books programs.

Hope to see you there.