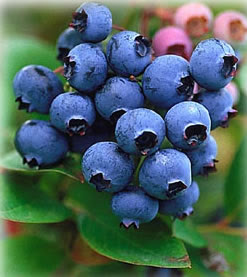 Attempted to go berry picking yesterday. The farm is about a half hour from my home, and it was very overcast, with the prediction of some pop up thunderstorms. Being this close to the Lake anything can happen, and does.

A few drops began to sprinkle as I headed out to the rows of blueberries. Then, a swoosh of cool air and big fat raindrops, which felt delicious. A year ago, I was caught in a storm there and kept picking. But, this time, it grew more and more intense. The thunder I thought was rolling off, was actually rolling around and around overhead; followed by
cracks of lightning. Oh jumpin joseph! Considered hiding under a bush, but thought better of it. Made my way back to the farm's storefront. Just as I got under the eaves (soaked to the bone), the rain came down even harder.
Lightning everywhere. I had about a pint of berries. A woman, who I spoke to as I headed out to the rows, came out under the eaves and gave me a wad of paper towels and asked me if I wanted a cup of coffee(that was dear of her, don't you think.) She told me my berries were going to get washed, and boy, was she right. Then, after she made sure I didn't want a cup of coffee and my face was sufficiently mopped up, she headed back inside and out of no where came a tall, fit
WW11 Navy Vet, who talked to me for nearly 45 minutes. The storm lasted that long.
He had quite a story and I listened. My guess he was 84 years old, but really fit, so he looked younger and had the philosopher's twinkle in his eye. Sometimes, I get into situations that seem like scenes from a movie. Both of these people were poignant. When I squeaked my way to check out, my picking amounted to $1.19 , which made me sigh. Stopped at a roadside stand and bought corn and peaches. The 8 quart basket fell apart on the dirt lot (a mess!) Had to pick them up and stash them into plastic bags. I was so cold when I arrived home, I changed into my PJ's and ate dinner with peter. Sliced up a few peaches for dessert and sprinkled premium
blueberries on the slices. Yum.


This morning the sun is out, I'm thinking I will try again.

Last night, and actually for several nights in a row, I've been dreaming about my parents. They look beautiful in my dreams, and we're at the lake house, which is now my sister's home.
When I dream of people who are no longer on Earth, they always have an aura around their whole bodies, and the auras are different colors, and the colors change when they are active or quiet. The dreams have been very comforting. When my mom died, my desire to talk on the phone went too. I used to call her all the time, about everything and nothing. I use to enjoy making her laugh. She had a great sense of humor, and she was always on my side. She was a great support, even when she really didn't understand my desire to be a writer. I can't remember everything in these dreams, except for sense of calm. . . .
Posted by M.J.Iuppa at 9:36 AM