All the Weather of March in One Day 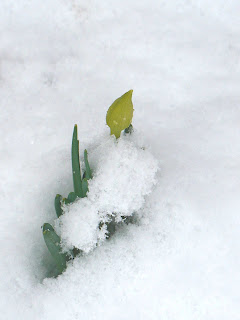 Daffodil with a mouthful of snow.
photo by K. Iuppa


Wind, rain, snow, sun (repeat). This was yesterday's whim.
I spent part of yesterday waiting for the mail, but what I was hoping for didn't arrive, just a bundle of throwaways. Although I do love " shopping" adverts and catalogs. I have marked three seed & tree catalogs, with my wish lists. I review them, click the pen against my teeth, change my mind about practically everything (repeat).

In this week I have found time to do some writing. Fisher is on break this week, so my workload is 1/2. Started my residencies in the schools this week. First project is digital stories with 5th graders. Last year's projects were terrific and we had a special showing at the Little Theatre. The children thought they were on a field trip to see Diary of a Wimpy Kid (which had them out of their skins with excitement-- they all love those books). Little did they know that the feature was actually their movies. The theatre held over 75 students and teachers, which on a normal day can be noisy-- not that morning, you could hear a pin drop. They we so attentive watching their work on the big screen. Huge applause at the end of each movie. It was such a success. This year's students have some fabulous ideas brewing. Going to have a blast working with them.

Last night we went to Eastman Theatre to hear The Studio Orchestra under the direction of Bill Dobbins. It was a free concert, which means you could sit anywhere in the theatre. We chose the box seats, which gave us a great view of all the musicians. The program showcased original compositions by Levi Saelua, Dave Chisholm, Mike Conrad, Reuben Allen-- all are current Eastman students, as well as music by Jelly Roll Martin, Bill Evans and Duke Ellington.
Bill Dobbins arranged Morton's "King Porter Stomp" and Ellington's "Drop Me Off in Harlem"and "Ko Ko"and Marc Schwartz (Eastman student-saxophone) arranged Evan's "The Two Lonely People." The music was just gorgeous the fusion of the Jazz Ensemble with the Studio Orchestra had me from the moment they began to play. The original compositions: "On My Own" (Saelua), featuring Andrew Pramuk, baritone; "Tiny Dinosaurs" (Chisholm), "Vice President in Charge of Volcanoes" (Conrad) and "Nocturne" (Allen) ran the gamut of moods. Heads-up filmmakers, you'll want these composers for your next films. I was so impressed. Afterwards we went to a
small wine bar on South Avenue and drank Beaumount red wine and had some time to catch up
with our friends. It was a relaxing Friday evening. Great fun.

According to the program, the upcoming free concerts are:

Mark your calendars. These upcoming performances won't disappoint.
Posted by M.J.Iuppa at 7:36 AM