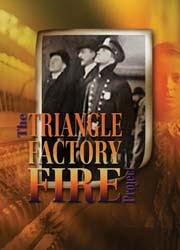 Area Premiere! On March 25, 1911, a fire roared through Manhattan's Triangle Shirtwaist Factory causing the death of 146 immigrant garment workers. On the 100th Anniversary of the fire, this powerful play explores the shocking event that changed working conditions, shaped labor unions and became a key to women's suffrage.

This is a MUST SEE play. Don't miss it.